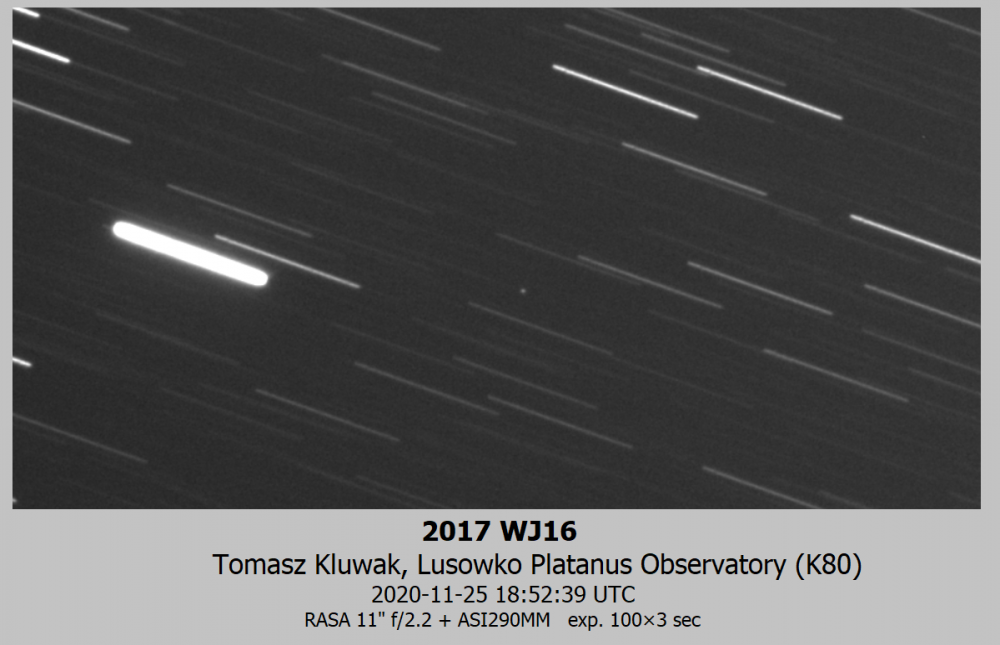 On the only clear night in November, on November 25th/26th we have decided to observe 2017 WJ16 asteroid. It has been discovered some years ago (yes, you guess correctly – in 2017), but there were not enough observations to deliver precise physical informations. From the mean brightness astronomers estimated its diameter for 40-80 m across. This size is far enough to induce a catastrophe of enormous scope. Impact energy of such an asteroid depends on many factors, however sometimes can be as huge as 1000 atomic bombs of Hiroshima. That’s why it’s so important to detect and follow such objects. So, we made the most of the opportunity taking almost 10.000 images in 10 hours observations. Although processing is still ongoing, we can already estimate its rotation period for app. 341 seconds. What does it mean? That it is not a loose aggregate of debris, but most likely a piece of solid rock, possibly from the decay of another object (e.g. as a result of a cosmic catastrophe). This is not good news. The good news is the orbit derived from new observations – although the asteroid approaches Earth every 3 years, there is no chance that it will hit our planet in the next 200 years.
Brief update (Dec 15th, 2020): after deep lightcurve analysis, it becomes clear that 2017 WJ16 is a tumbler with clear 2 periods detected: 341.1 s and 438.9 s.